Should Christians Stand Up For Their Rights?

That is a big problem indeed, and something we encounter all the time. It has emerged once again in the Israel Folau saga. All sorts of dopey and unbiblical thinking surrounds his case. I have rebutted much of it in past articles. But let me address some more of it here. 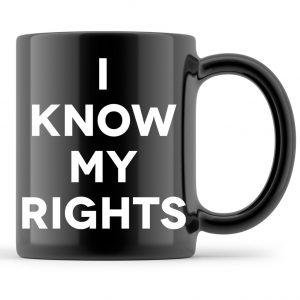 Let me quote from just one of them. A concerned Christian sent me a message asking what I thought of one such Christian’s thoughts on this. He had said:

My very brief and quick reply was as follows:

Baloney. We have as much of a right to stand up for our beliefs in public as anyone else. And we can evangelise and do other good things too – it is foolish to force us to choose one or the other. And when free speech suffers, we all suffer, so I just don’t buy his view. See more on this here.

As to our relationship to God, yes, in one sense, we have no rights. As Paul could say, we are bondslaves to Christ. A slave has no rights, and exists simply to serve the master. So in that sense, yes, we say no to self, to our desires, to our rights, and to our plans. We lay everything at his feet.

But it is an altogether different matter when it comes to the Christian and how he relates to the culture around him. We have both obligations as well as rights as citizens of the country we live in. And there is nothing amiss in utilising those rights or standing up and defending oneself.

One simply has to look at the life of the Apostle Paul to see this. The last eight chapters in the book of Acts are all devoted to Paul and his relationship with the powers that be. They are all about him defending himself against trumped-up charges, and appealing to his rights as a Roman citizen.

And he was even warned ahead of time by the Holy Spirit and by prophetic words that he would face real trouble if he went on to Jerusalem. As we read in Acts 20: 22-24:

“And now, compelled by the Spirit, I am going to Jerusalem, not knowing what will happen to me there. I only know that in every city the Holy Spirit warns me that prison and hardships are facing me. However, I consider my life worth nothing to me; my only aim is to finish the race and complete the task the Lord Jesus has given me—the task of testifying to the good news of God’s grace.”

In Acts 21 we read about Paul in Jerusalem, and from verse 27 onwards we read about his arrest. And in verse 37 and following Paul makes his first defence. The remainder of the book of Acts deals with his various court appearances, his appeals, and his verbal and legal defences.

There is one defence speech after another found here. But according to these Christian critics, Paul was wrong to seek to defend himself, he was wrong to seek justice from secular rulers, and he was really just wasting his time. But Paul did not think so, nor did Luke, as he records all this under the inspiration and guidance of the Holy Spirit.

In these chapters there is not the slightest hint that Paul should have just rolled over and played dead. He knows full well that he has rights as a Roman citizen and he fully intends to stand up for them. He seeks justice – even from pagan rulers.

Thus the many speeches he gives defending himself, and the many times we read about him making an appeal to Caesar. Some of the passages worth noting here include these:

Acts 22:25-28 As they stretched him out to flog him, Paul said to the centurion standing there, “Is it legal for you to flog a Roman citizen who hasn’t even been found guilty?” When the centurion heard this, he went to the commander and reported it. “What are you going to do?” he asked. “This man is a Roman citizen.” The commander went to Paul and asked, “Tell me, are you a Roman citizen?” “Yes, I am,” he answered. Then the commander said, “I had to pay a lot of money for my citizenship.” “But I was born a citizen,” Paul replied.

Acts 25:11-12 “If, however, I am guilty of doing anything deserving death, I do not refuse to die. But if the charges brought against me by these Jews are not true, no one has the right to hand me over to them. I appeal to Caesar!” After Festus had conferred with his council, he declared: “You have appealed to Caesar. To Caesar you will go!”

Acts 25:21 But when Paul made his appeal to be held over for the Emperor’s decision, I ordered him held until I could send him to Caesar.”

Acts 25:25 I found he had done nothing deserving of death, but because he made his appeal to the Emperor I decided to send him to Rome.

Acts 26:32 Agrippa said to Festus, “This man could have been set free if he had not appealed to Caesar.”

Acts 28:19 The Jews objected, so I was compelled to make an appeal to Caesar. I certainly did not intend to bring any charge against my own people.

For much more detail on all this, one can consult the various commentaries on Acts, or turn to some books on Paul, including the classic 1977 work by F. F. Bruce, Paul: Apostle of the Heart Set Free. They all provide a lot more background into the political, cultural and legal situation Paul found himself in.

But let me make a few more comments on this. It has been noted that we have some similarities with the trials Paul had to sit through, and those of Jesus. Felix for example knew that Paul was innocent, but for political expediency’ sake, he kept him imprisoned. So too Pontius Pilate. He could find no fault in Jesus, but he feared the crowds, and wanted to please them.

Some might argue that Jesus did not stand up for his rights when he was tried, so neither should we. But that ignores a very basic truth: Jesus was unique, he was a man on a mission, and he was born to die. The cross WAS his appointed end, and he would not let anything get in the way of him fulfilling his divine appointment.

You and I and Paul are not called to die for the sins of the world. Paul was called to preach the Gospel, and so he made full use of his rights as a Roman citizen to be able to fulfil his calling. He knew he was being unjustly accused and tried, so he stood up for his rights.

And Christians should be able to do this as well. Each believer may need to pray about when they should seek justice and utilise their rights, and when they should be willing to just submit, even if injustice results. I have written about this before.

When it comes to things like personal justice, the Christian can turn the other cheek. Let’s say a guy breaks into my home and steals a bunch of my stuff. Let’s say I happen to know who he is. I am well within my rights to report him to the police, and have him arrested and tried and convicted for his crimes.

But perhaps I have a relationship with this thief, am witnessing to him, and am praying for his conversion. I can, if I so choose, forego my rights of justice and simply say, “I forgive you, but I am praying that you come to know Christ, and stop your wicked ways.” However, another Christian would be fully justified in taking such a thief to court and see him get his just punishment, if so led.

So individuals can prayerfully consider when they seek justice, and when they might willingly allow it to be bypassed. In the case of Paul, he felt led by God to stand up for his rights, to defend himself, and to appeal to the ruling authorities. He clearly was not sinful in doing this.

Thus those critics who are attacking Folau, saying he should just act as a doormat and take everything that is being thrown at him are simply wrong – and unbiblical. Folau has every right to seek to defend himself here against his unfair dismissal and against all this ugly anti-Christian bigotry.

As I and others keep saying, Folau is not just defending himself here. He is defending all of us as he stands for the vital social goods of free speech and religious freedom. He has every right to stand up for faith and freedom in an increasingly hostile culture.

In sum, while Christians are to hand all their rights, longings, wishes and wants over to Jesus Christ as their Lord and Saviour, they do have rights as citizens and taxpayers in the countries they live in. There is nothing wrong with standing up for those rights, especially when grave injustices are taking place.

Public justice is important, and we need not be ashamed in seeking it. At times God may ask us to be willing to waive those rights. But normally we should seek to see that which is right be promoted both on a private and public level. Paul did that, and so can we.