So now you can legally change your sex at least once every year in Victoria.

When you are driving around the country on lengthy trips, you will sometimes alleviate the boredom by looking at license plates. On them you will see the different mottos of each state. For example, Queensland is the “Sunshine State.” Victoria used to be the “Garden State,” but now it clearly is the “Nutjob State”.

I have documented this far too many times already, but it just seems to get steadily worse. The latest insanity to come out of the hyper-left Andrews’ government is to destroy our birth certificates. Sure, it’s not the first Australian state to push this madness, but added to all its other radical agenda items, Victoria leads the way in moonbattery. 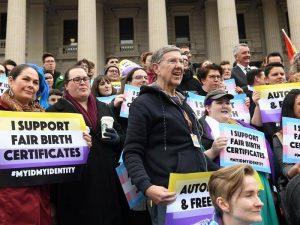 One news report offers this coverage of the story:

Transgender and gender-diverse people in Victoria will be able to change the sex on their birth certificate without having to undergo gender reassignment surgery, after reforms were passed in parliament overnight. The Births, Deaths and Marriages Registration Amendment Bill introduced by the state government passed 26-14 in the Victorian upper house on Tuesday night and will now go to the Governor for royal assent.

The bill will remove the current requirement for transgender people to undergo sex reassignment surgery before updating their birth certificate. They will also be free to self-nominate their sex as male, female or many other non-binary descriptors of their choice.

Children will also be able to alter the gender on their birth certificate, provided they have parental support and a statement from a doctor or registered psychologist stating that the decision is in the child’s best interests. Victoria became the fifth state in Australia to adopt the reform, bringing it in line with Tasmania, Northern Territory, South Australia and the ACT.

For those who still have possession of their rational faculties, this is so very wrong on so many fronts. First, it plays into the war on biology and the war on reality. Simply identifying as another gender does not make you that. A boy remains a boy no matter how much he identifies as a girl.

Plenty of kids in their fantasy life and at play identified as astronauts or aliens or race car drivers. Should governments now acknowledge these preferences and identities? If a four-year-old kid identifies as a famous Ferrari driver, should the state allow him into this year’s Grand Prix?

If not, why not? Andrews and Co are now insisting that identity trumps reality, so why not here? To ban a kid from joining in on the race is obviously the height of bigotry and discrimination. Time to lift your game Andrews and stop this ugly intolerance.

Moreover, what are birth certificates for? Among other things, they are officially recognised identity documents that assist in establishing citizenship. They are very important documents for other reasons, including medical reasons.

But now they are in many ways becoming meaningless. And with kids and others allowed to change their certificate every 12 months, this will just become a never-ending circus, with our more usual changes to hair colour or apparel outstripped by endless gender options.

And it is not just some bigoted cisgender stuff we are talking about here – the sky is the limit. The Births, Deaths and Marriages Registration Amendment Bill 2019 says this in its section on definitions: “sex descriptor includes—(a) male; or (b) female; or (c) any other sex”.

Hmm: “any other”. There are now more possible gender options than there are moonbeam proposals coming out of the Victorian government. Here are just a few of them in case you have forgotten what exciting options we have to choose from: ambigender, skoliosexual, neutrois, androgyne, nanogender, two-spirit, pangender, transmasculine, and vapogender.

Wow, so if a guy lives to the ripe old age of 99, he could potentially identify (officially and legally) with some 90-plus genders. Freedom! Liberation! Talk about telling biology to take a hike. Talk about creating your own reality. The New Age mind-over-matter and creative visualisation folks ain’t got nothing on these trans morphisms.

The war against biology and reality is at heart a war against the truth. But since when did the left give a rip about truth? Telling lies on our birth certificates impacts every single one of us. As Spiked editor Brendan O’Neill said in a recent piece:

The midwives and doctors who delivered a baby with a penis were telling the truth when they said: “It’s a boy.” And their truth was recorded, faithfully and dutifully, by the public registrar. The end result was a birth certificate, one of society’s essential documents. The birth certificate is the measure of ­society itself: it tells us who was born, when and where they were born, and who their parents were. To alter such documents — to falsify them — is to interfere with the history and knowledge of society itself.

This is very different to when a trans person changes their name by deed poll, which it is absolutely their right to do. It is even different to when a trans person changes the sex on their passport, which also makes me feel uncomfortable, but I can live with it. Because when we change sex on a birth certificate we sanction lying; we deceive future generations.

Leftists have always sought to deceive people, and the totalist state works overtime at perfecting this. Andrews must have studied carefully the works of George Orwell and others. In Orwell’s prescient dystopian novel 1984, the hero Winston Smith is being tortured in the ‘Ministry of Love’. His interrogator is trying to ‘cure’ him of his belief that reality is found in anything other than as the State sees it. As he informs Smith:

You believe that reality is something objective, external, existing in its own right. You also believe that the nature of reality is self-evident. When you delude yourself into thinking that you see something, you assume that everyone else sees the same thing as you. But I tell you, Winston, that reality is not external. Reality exists in the human mind, and nowhere else. Not in the individual mind, which can make mistakes, and in any case soon perishes; only in the mind of the Party, which is collective and immortal.

Welcome to the Andrews’ Ministry of Truth 2019.