It is well known that most who served in the Anzac forces were believers in our Lord Jesus. Many carried Bibles. I share three stories here. First, Harry Bell who lied about his age to join the Australian Light Horse and gave his life at the Charge on Be’er Sheva. Secondly, how both Australia and New Zealand fought to win the battle. Thirdly, Fighting Mac, who was a chaplain for the Anzacs.

16 year old Christian Harold Wickham (Bell), who gave his life for his mates and for Israel, was a young farmer who attended a Presbyterian Church.

Greater love has no man than this, that a man lay down his life for his friends.
~ John 15.13

He could see little orange flashes and could hear whistling overhead. “I wonder what that is?” Harry thought. His answer came all too soon, as a machine gun round smashed into his leg. He never thought such pain existed – the force of the round threw him from the horse. He bounced along the ground and came to a halt in the dirty, broken soil. The sound of thundering hooves warned him to cover his head as another wave of horsemen galloped over him.

He glanced down at his leg: it lay at a grotesque angle, the result of the bullet shattering his femur. Then things started to blur as he succumbed to the pain, which lapsed him into unconsciousness. 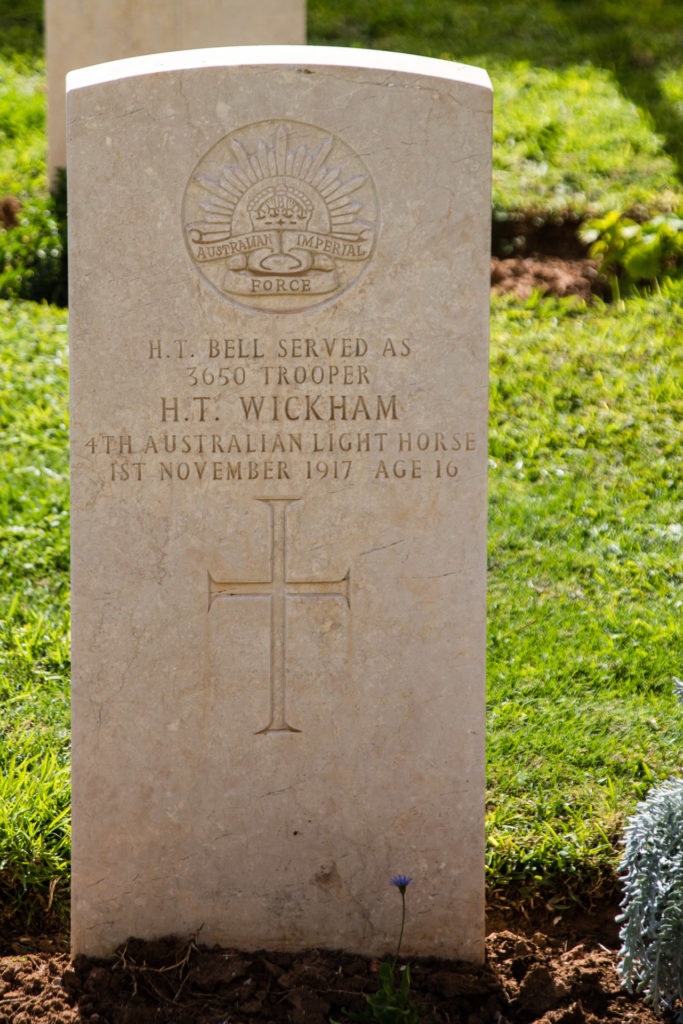 As he struggled to regain consciousness, he felt the warmth of morphine, interrupted intermittently by the sharpness of excruciating pain.

As the padre sat next to him, Harry asked how the regiment had fared.

“We took the town Harry, and the blokes and horses are enjoying a good drink.”

Harry lapsed in and out of consciousness throughout the night. In the morning he was still alive but only just. The padre again called on him. “Make sure they get the headstone right,” Harry screamed, and with that the young trooper went limp.

Harry (Harold Bell) wanted his real name on his tombstone.

Exactly 100 years later, to the day 31/Oct/2017, we see the fruit of Harry’s and others’ sacrifice in the following photograph at the Be’er Sheva street parade held after the memorial service.

Australia and New Zealand win together

The capture of Beersheba (Be’er Sheva in modern Israel) was a turning point in the struggle between the British and Ottoman Empires in the Middle East in the First World War. The New Zealand Mounted Rifles Brigade played a key part in the capture of the town by the Australian Light Horse.

Twice in 1917, the British-led Egyptian Expeditionary Force (EEF) had failed to take Gaza, the gateway to Palestine. Its third attempt focused on Beersheba, on the eastern (inland) flank of the Ottomans’ defensive line. While three British infantry divisions attacked the main Ottoman defences on the outskirts of Beersheba, the Australian Light Horse rode in a wide arc to the east to attack the town from the rear.

Of biblical note is that Tel Be’er Sheva is the ancient Be’er Sheva of Genesis where Abraham dug wells and made covenant. These wells have been re-dug by the Israeli government and have sweet water once again. 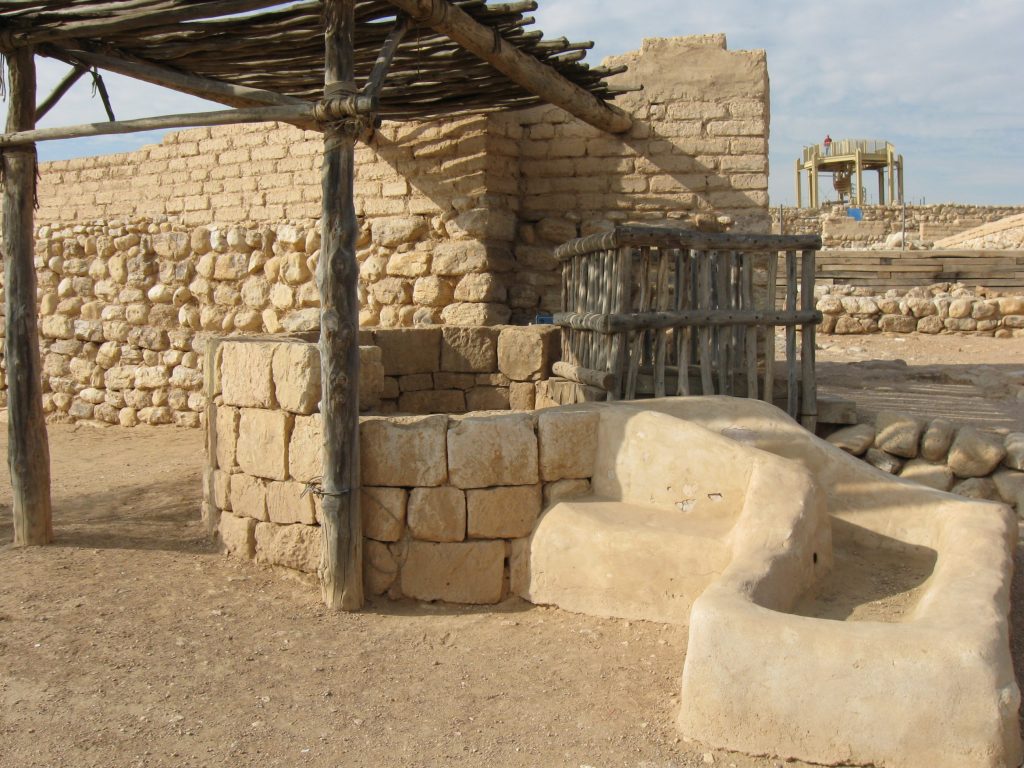 The way was now clear to attack Beersheba itself, but daylight would soon fade. In a daring action, the 4th and 12th Australian Light Horse regiments charged in from the south-east with bayonets drawn, taking the Ottoman defenders by surprise. The town and its important wells were soon secured and the enemy retreated. By the end of the day at least eight New Zealanders had been killed and 26 wounded.

Without the brave action by the New Zealand Mounted Rifles Brigade, the 4th Australian Light Horse Brigade charge would have failed miserably due to withering Turkish machine gun fire.

With time running out for the Australians to capture Beersheba and its wells before dark, Lieutenant General Harry Chauvel, the Australian commander of the Desert Mounted Corps, ordered Brigadier General William Grant, commanding the 4th Light Horse Brigade, to make a mounted attack directly towards the town. Chauvel knew, from aerial photographs, that the Turkish trenches in front of the town were not protected by barbed wire. However, German bombing had forced the 4th Brigade into a scattered formation, and it was not until 4.50 pm that they were in position. The Brigade assembled behind rising ground 6 kilometres south-east of Beersheba with the 4th Light Horse Regiment on the right, the 12th Light Horse Regiment on the left and the 11th Light Horse Regiment in reserve.

The Australian Light Horse was to be used purely as cavalry for the first time. Although they were not equipped with cavalry sabres, the Turks who faced the long bayonets held by the Australians did not consider there was much difference between a charge by cavalry and a charge by mounted infantry. The Light Horse moved off at the trot, and almost at once quickened to a gallop. As they came over the top of the ridge and looked down the long, gentle open slope to Beersheba, they were seen by the Turkish gunners, who opened fire with shrapnel. But the pace was too fast for the gunners. After three kilometres Turkish machine-guns opened fire from the flank, but they were detected and silenced by British artillery. The rifle fire from the Turkish trenches was wild and high as the Light Horse approached. The front trench and the main trench were jumped and some men dismounted and then attacked the Turks with rifle and bayonet from the rear. Some galloped ahead to seize the rear trenches, while other squadrons galloped straight into Beersheba.

Nearly all the wells of Beersheba were intact and further water was available from a storm that had filled the pools. The 4th and 12th Light Horse casualties were thirty-one killed and thirty-six wounded; they captured over 700 men. The capture of Beersheba meant that the Gaza-Beersheba line was turned. Gaza fell a week later and on 9 December 1917, the British troops entered Jerusalem.

One of the things that is very interesting is that the Light Horse had the highest number of Indigenous soldiers in any regiment within the AIF in WWI.

In August 1914, war was declared and Fighting McKenzie (William McKenzie, Chaplain) was one of 416,809 volunteers who served in the Armed Forces. The population of Australia was fewer than 5 million people at the time. On a country by country basis, Australia had more troops at war per head of population, and suffered higher death rates and casualty rates than any other country that fought in the first World War.

Fighting Mac personally buried hundreds of young Anzacs, often in the middle of a hail of bullets. During this period, he developed a life-long hatred for war. He wrote:

“Many of the bravest and the best are gone… War is nothing short of insensitive folly. It is inconclusive in its results and devastating in its ultimate consequences.”

Other soldiers described the duty and demeanour of this humble but courageous chaplain:

“Among the duties of this Anzac chaplain – dubbed ‘Anzac Mac’ or ‘Fighting Mac’ by the men who had grown to love and respect him – was searching for the wounded and dead, as well as identifying bodies and giving them a decent burial and advising relatives by letter. Although officially forbidden from remaining in the front lines or from taking part in battles, Mac had no intention of standing idly by while, ‘my boys fight’.”

The mateship, self-sacrifice and bravery in the face of impossible odds, shown on the battlefields of World War I, exemplifies the values that have made Australia great.

May the Anzac and Light Horse anointing of God, mateship, honour, strength, service, bravery, and self-sacrifice rise in Australia for the Gospel of our Lord Jesus.

We pray that these eternal values rise again in Australia, that the Church of our Lord Jesus Christ stand and proclaim the truth of the Gospel, that this nation of Australia repent of its sins and fully turn back to the Lord.

We also call forth the Joseph calling and anointing that Australia will fulfil its God-given call to provide to the nations, both physically and with Christian mission.

Father in Heaven, we ask that You be the head of this nation of Australia, and that You bless us your sons and daughters in service for Your Kingdom.

[Photo by David Clode on Unsplash]

About the Author: Kym Farnik